To say that the last week was interesting in the cryptocurrency market would be a massive understatement. Bitcoin almost reached $50K, Ethereum shot past $1800, BNB peaked at around $150 – these are just some of the highlights.

Starting off, a few days ago, Bitcoin received perhaps what might be considered as its major endorsement in the recent years – Tesla revealed a bitcoin buy worth $1.5 billion in January. That’s right – one of the world’s largest public companies allocated around 15% of its net cash into Bitcoin.

Needless to say, this sent the primary cryptocurrency for the skies as its price surged from around $39,000 to $48,000 in a day. After what many considered to be a healthy correction and a dip below $44K, Bitcoin charted a fresh all-time high, which currently sits at exactly $49,000.00 on Bitstamp. At this point, it seems like a matter of time before it’s breached.

Altcoins had a huge week as well. Ethereum is currently trading well above $1,800, and it’s also painting fresh highs daily. The DeFi market is popping with the total value locked in various DeFi protocols topping $40 billion.

It’s also worth noting that Binance Smart Chain (BSC) is also catching up to speed with some projects standing on the top of interest meters, such as PancakeSwap – a Uniswap alternative for BSC, which has already surpassed SushiSwap in terms of total market capitalization.

In any case, the week was particularly positive in terms of developments. The oldest bank in the US, BNY Mellon, announced that it would custody Bitcoin and other cryptocurrencies for its institutional clients. Another leading payment processor, Mastercard, joined the likes of Visa and said that it would potentially integrate cryptocurrencies in its network of merchants.

All in all, the past seven days were thrilling, and it remains very interesting to see what will happen next. 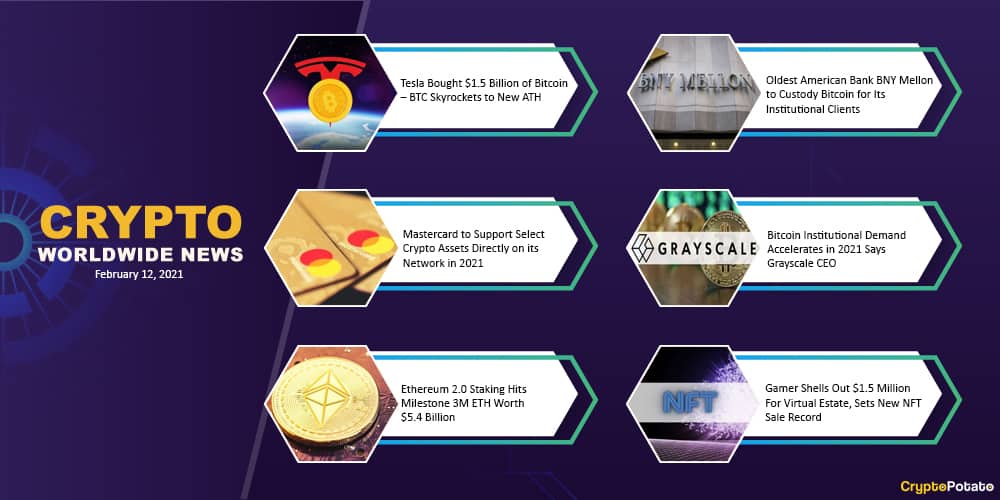 Tesla Bought $1.5 Billion of Bitcoin – BTC Skyrockets to New ATH. Tesla, one of the world’s largest companies, spearheaded by the world’s richest man, Elon Musk, has bought $1.5 billion of BTC in January. This became clear in an SEC filing filed a few days ago where the company also revealed that it may begin accepting bitcoins for its products.

Mastercard to Support Select Crypto Assets Directly on its Network in 2021. One of the world’s leading payment processing companies, Mastercard, revealed that it will integrate cryptocurrencies directly into its merchants’ network in 2021. This comes shortly after the largest company in the field, Visa, announced the same thing.

Bitcoin Institutional Demand Accelerates in 2021 Says Grayscale CEO. According to the CEO of the world’s largest cryptocurrency asset manager, Grayscale, institutional interest in Bitcoin is accelerating in 2021. He also said that the narrative has shifted from “why” to “why not” when it comes to investing in BTC.

Ethereum 2.0 Staking Hits Milestone 3M ETH Worth $5.4 Billion. The total amount of ETH staked on the Ethereum 2.0 blockchain has now topped three million. There are over 84,000 active validators and almost 9000 pending as the chain seems to be progressing quite impressively.

Gamer Shells Out $1.5 Million For Virtual Estate, Sets New NFT Sale Record. The frenzy around non-fungible tokens continues with full force. In a staggering sale, someone has paid over $1.5 million for virtual real estate. The user purchased 9 Genesis plots of virtual land on the blockchain-powered gaming platform.

This week we have a chart analysis of Bitcoin, Ethereum, Ripple, Cardano, and Binance Coin – click here for the full price analysis.

3 min read
On June 21, the wealth manager Vaneck filed a prospectus to launch what it calls a Bitcoin Strategy Fund. The